Mukhosh was born in Bengaluru, and was mainly responsible for creating a space for Bengali theatre in Bengaluru, a city that houses more than three lakhs of Bengalis. The two theatre festivals (“Moitree”) that we organized in 2008 and 2009 considerably catalyzed Bengali theatre in the city, which now has several active theatre groups. The leadership of Mukhosh moved to Kolkata in 2009, and we started theatre work in Bengal since 2014 as Kalyani Mukhosh Nattyadal. Kalyani Mukhosh is led by two scientists – Ayan Banerjee and Anindita Bhadra, physicist and biologist, respectively, and faculty members of IISER Kolkata – a Govt of India science institute for teaching and research akin to the IITs and IISc, Bengaluru. Fittingly, Mukhosh lives by the motto “Science in our brain, theatre in our heart!” Thus, Mukhosh believes in the fusion of science and the arts, and employs the “scientific method” – that of analysis and experimentation towards understanding human society. Our plays ask questions, and explore the full range of human emotions, and even intend to analyse the roots of creativity.

In Kolkata, Mukhosh has come up with four productions – three in Bangla, and one in English, and is all set to present its fifth. The first production – ‘Brishti, finally…” (in Bangla) is one of holds the distinction of being the first online crowd-funded theatre project in the history of Bangla theatre. The play explores the creative instinct of an individual, and the limits of obsessive passion – both towards one’s love in real life and that towards a work of art, which in this case is in the form of script. The production has several experimental angles – the most important being the combining of the proximity of theatre and the intimacy of cinema – with the events occurring on stage often being pre-empted or the characters explored in different space-times using the medium of cinema that would be merged with the live action on stage. “Brishti, finally…” is a story of creation, of obsession, of lies, and finally – love. 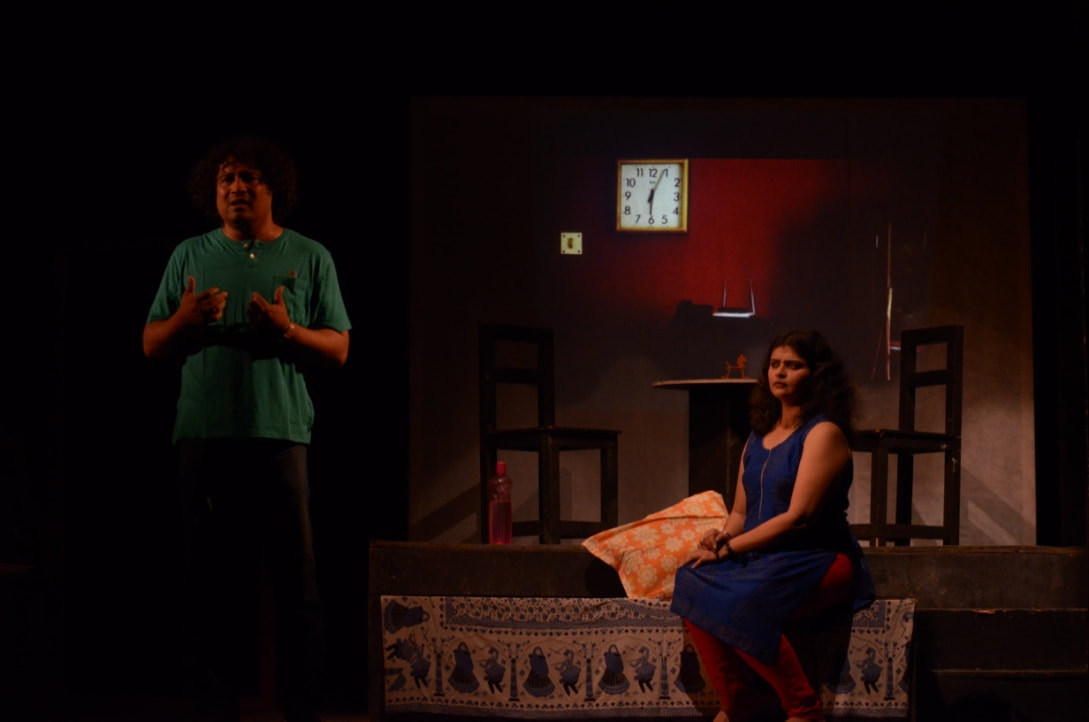 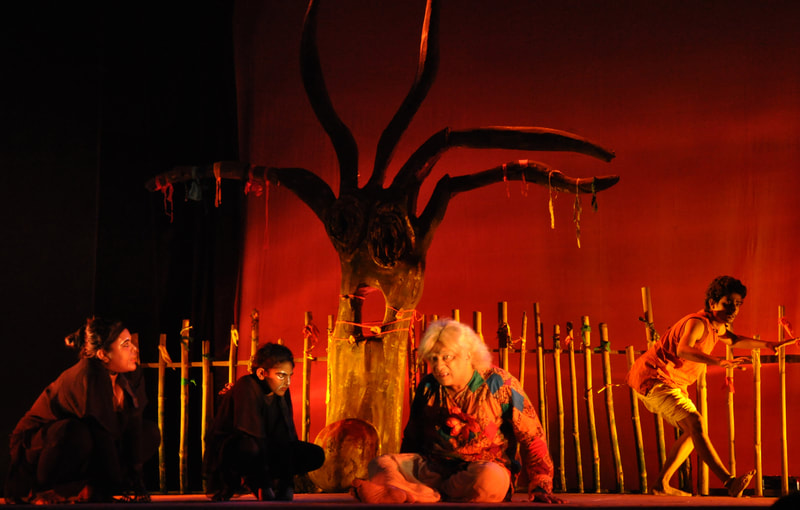 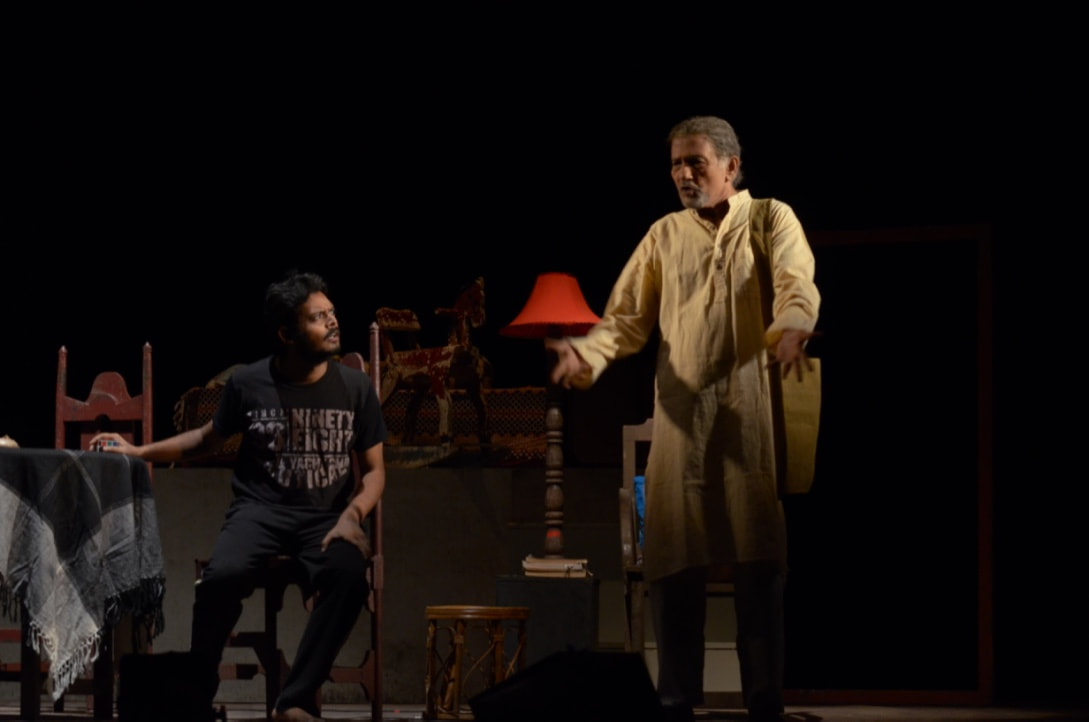 ​Our second production ‘Mallabhumi’ (in Bangla) –  is a dark and disturbing fable that revolves around the classic trio of the conventional fairy tale – a Rakshas (man-eating fiend), the all-conquering young Hero, and the Pakshi-raj (winged) horse that usually carries the hero to his victory over the Rakshas. But in our story, the settings are different, and strange twists and turns follow as the audience is taken on a new journey in the fairy-tale genre, but one that is far more macabre than what we are accustomed to.

Our third production ‘The Uncertainty of Principles’ (in English) marks a union of our brains and our hearts, for this is a play on science and society. Enacted by practitioners and teachers of science, the play showcases the conflict between science and organized religion, and juxtaposes the ideology and thought process of a young scientist against a society still deeply ensconced in the irrationalities and insecurities that plague most human minds subjected to the unpredictability of life. Religion often offers easy solace in the form of so-called ‘Godmen’ who exploit the helplessness of millions in order to enjoy a luxurious life. Can the scientist triumph against the Godman? Can science in our times win against religion? Would the scientist finally come out of his isolation and embark on a mission of spreading the light of science in the way we live? ‘The Uncertainty of Principles’ explores some of these questions, and attempts to seek possible answers. The play is bilingual – ‘Tawrke Bohu Dur’ being the Bengali version with several changes in characterization and content so as to make it very different from its English counterpart.

Presently, we are all set to launch our new play ‘2034’ – which is a play that anticipates the future through the veneer of a magic show that is suddenly drawn into the jaws of a strange reality – a reality unknown to the audience which – when it saw the events unfold on stage initially, had no inkling about the world that the magicians and the other characters actually occupied. It is inspired by a play of yore – written by Badal Sarkar – the theatre magician who gave India ‘Evam Indrajit’ – possibly the first play which introduced Indian theatre to the western genres of absurdist and minimalist theatre. 2034 contains Sarkar’s signature effects – a theatre in direct contact with the audience with the magician Moinak interacting with some of them at the beginning as part of his magic show – but it is not third theatre, for the rest of the play unfolds on stage, and at the end, transports the audience into a reality they might not have anticipated amidst the ambience of breezy light humour which envelopes the play almost throughout its duration.

2034 was supposed to have been launched in March – but the world suddenly changed during that time, and humanity has faced one of its greatest ever crises since the histories of civilizations has been recorded – all in the form of an object utterly invisible to the human eye – a virus which in all its nanometric dimensions has caught a world billions of times bigger completely unprepared. Thus, as we struggle amidst an unprecedented situation filled with our normal lives totally ‘locked down’ – Mukhosh – in its capacity of being a theatre group made up of science-practitioners – has come up with two audio plays – one in English and the other in Bengali – both about tackling this strange situation. Both plays are available in YouTube, and we invite the interested to hear and comment on them. https://www.youtube.com/watch?v=zkoHya8Acyg&t=91s is the Bengali play – Corona kumir o Haripada, while https://www.youtube.com/watch?v=4Tw_9Pfbfu8&t=502s is the English play – Healing, in the time of Corona.